BACK TO OUR BLOG
Advocacy Communications, NGO & Advocacies

This blog post was written by Mark Mailom, our Project Manager for Corporate and Public Affairs who is also a former Teach for the Philippines (TFP) Fellow.

Municipality of Del Carmen, Siargao – It was my first time traveling alone for work. When I first arrived in Siargao, I was expecting palm trees, beaches, and long winding roads which are best enjoyed riding on a motorcycle. Instead, I saw the total opposite: a devastated island, still recovering 9 months after typhoon Odette. There were signs for evacuation sites every two kilometers from Sayak Airport, houses still had their roofs torn down, and a couple of street lamps were cut in half. Nonetheless, it was serene and quiet; the air felt a good kind of different.

The fifth class municipality of Del Carmen is one of Teach for the Philippines’ (TFP) partners, among other far-flung, high-need areas in the country that desperately needs support at both the grassroots and policy-level. I visited this town for media relations and engagement for TFP’s “Kilapsaw” documentary roadshow, the last leg after Manila and Bacolod.

“Kilapsaw” is a film produced by TFP as part of its 10th anniversary campaign, anchored on the theme “Ripples of Impact.” I think it’s fitting that the last roadshow will be conducted in Siargao, an island surrounded by big and small ripples, and a community that has been one of TFP’s longest and strongest partners.

But before the public screening of the documentary, I had to visit one of its featured parent partners, Nanay Jen Abanzado.

Nanay Jen was one of the beneficiaries of TFP Teacher Fellows’ Project ALON (Audio Learning Opportunity for Numancia), a community engagement project implemented in 2021 at Numancia Central Elementary School (NCES) to address the learning gaps exposed by the pandemic: no face-to-face classes, modular approach in learning, little-to-no supply of gadgets, and very poor internet connection.

The project helps develop the skills of NCES teachers to produce scripts for audio-based reading materials, based on the Marungko Approach of teaching beginner Filipino reading. These scripts were recorded and stored in flash drives to be used on USB-ready solar-powered radios and were distributed to parents in the Del Carmen community. Instructional manuals and Marungko booklets were also distributed to the project’s beneficiaries.

But due to Odette’s rampage in 2021, Nanay Jen was only able to save her radio and the flash drive that came with it. She proudly demonstrated how to use the device when we arrived in her makeshift classroom in Sitio Lia-onan, a 10-minute pump boat ride from Del Carmen’s port.

(“All of the paper-based materials that Project ALON gave about Marungko Approach were gone,” Nanay Jen narrated, as she recalled the first night of the typhoon. “Everything in the lower part of our house had water in it. The waves were too big. This is the only one that I saved and kept.”)

We were chatting inside her kitchen where we could see Del Carmen’s mangroves and a calm horizon – a far cry from the calamity she was describing. She prepared several dishes for me: spicy squid, boiled seaweeds partnered with her special vinegar combined with coconut extract and calamansi squeeze, and a few other homemade delicacies.

She said that she was able to watch the trailer of the documentary already and was excited to watch it in full and live with her friends. The night before I arrived in Siargao, she video called me to make sure that I had a pump boat going to their sitio.

We continued chatting in her classroom, which was about five steps from the kitchen; a learning home for almost 40 students in their sitio. Before it had a blackboard, chalk, cabinets for supplies, and shelves, Nanay Jen used plywood and charcoal as her learning materials.

(“I am a barangay health worker. I receive a monthly honorarium worth 700 pesos. The first things that I buy are Grade 1 pad papers and pencils,” Nanay Jen shared. “I split them [with the children] and sometimes I also ask teachers in the island if they have spare notebooks [that the children] can write on.”)

Nanay Jen also shared that her inspiration to teach came from her experience as a kasambahay when she was in Manila. She believes that education is the greatest equalizer and emphasized the need for more parents like her to believe so.

(“What I teach first is how to dream,” Nanay Jen explained. “I always tell my students to really think about what they want to be when they grow up. Because the mothers here always say that ‘There’s no need to study. Just don’t do it anymore, we already have a stable income from fishing.’ But I keep telling my students that it’s for their own good, not just for their parents.”)

TFP and the Del Carmen community

Nanay Jen is only one of hundreds of parent beneficiaries of TFP’s programs in Del Carmen, Siargao, since the organization deployed Teacher Fellows and Alumni Ambassadors to the coastal area in 2015. NCES and Espoir School of Life are among the placement schools of TFP with a total of 12 Teacher Fellows and 9 Alumni Ambassadors for the Del Carmen LGU.

TFP’s Fellows have since worked with more than 900 students and 30 teachers in the Del Carmen community. In addition to this, TFP Ambassadors have worked at the policy-level to create programs on food security, agriculture, sports and recreation, and disaster relief operations.

Now, months after Odette, Nanay Jen’s classroom has been supported by the Del Carmen LGU and Silid Aralan, another non-profit organization geared toward capacity-building community-based teachers in different parts of the Philippines, through the support of former Del Carmen-based Teacher Fellows and Alumni Ambassadors.

Richmond Seladores, currently a Field Coordinator for the Development Academy of the Philippines (DAP) – Mindanao and a former TFP Alumni Ambassador in Del Carmen, said that Nanay Jen’s story is a manifestation of the success of different programs that they implemented.

“Although Project ALON is not yet used widely, even at the division-level, at least there is a community that benefits from its impact,” Richmond said. “Sa tingin ko doon talaga magsisimula, sa maliliit [na mga bagay], kasi ‘yun naman talaga ang point ng ‘ripples’ ‘di ba?”

(“I think that’s where it should start, from small things, since that’s the point of the ‘ripples’ [campaign] right?”)

Currently, Richmond has been in Siargao for almost two years, dedicating his time for post-disaster relief efforts in Halian and Anahawan islands in Siargao. Together with Ram Jaylo, another former TFP Alumni Ambassador, they have sustained their projects since January 2022 and made Halian island one of the first islands in Siargao to declare that they are fully-recovered.

(“After the Ambassador’s Program I said that I will commit a few months for the relief operations here,” Richmond narrated. “What happened in Halian was one of our wins this 2022. It was also because of TFP’s role after the typhoon, where alumni organized calls for donations to gather funds that were used to purchase chainsaws and for boat repairs; it was like a domino effect.”)

Richmond’s motivation also came from his first-hand experience of Odette, where he and ten other people stayed in the bathroom of their house for almost two hours because it was the only place that had stable walls and a roof.

On the other hand, Ram, currently a Project Assistant for Rare (a non-profit organization which focuses on coastal clean-ups and marine life conservation), said that the very essence of community development, amplified by TFP’s efforts, is strongly felt in the Siargao community.

(“My takeaway from the Ambassadors Program is that the partnerships and collaboration are helpful, especially seeing its effects on Nanay Jen, and in the projects that we are implementing now that slowly gains a wider scope,” Ram shared. “Personally, I could not have done any of this without the help of my colleagues from TFP, outside NGOs, and through the leadership of Mayor JR.”)

These stories are only among TFP’s countless efforts in the past decade. In the “Kilapsaw” documentary, more narratives are explored as other stakeholders share their insights on what it means to create ripples of impact in their respective communities.

Mayor Alfredo “JR” Matugas Coro II echoes this message as well, seeing how TFP’s efforts in the Del Carmen community grew and were sustained, especially after Odette struck. He said that he believed in TFP’s leadership program at the onset, but wanted to stretch the programs even more and let the Fellows and Ambassadors engage with the community deeper.

“When you teach, it’s [just] confined to the classroom: teacher, confined to the student. So how do you expand [the] impact and teach the community?” Mayor JR explained. “When the first set of Teacher Fellows arrived, I asked them ‘What is your impact? How does the community relate to you? How do they see you and how do you see them?’”

In his speech before the “Kilapsaw” documentary screening, Mayor JR emphasized how thankful he is for the partnership that TFP brought to the community. He recalled how one of the programs initiated by an Alumni Ambassador increased the profits and value of Del Carmen’s king crabs, and how it helped the community on an economic level.

“The changes in the community need guidance from very young leaders that are willing, you know, to get out of their shadows, to get out of their comfort zones and be in rural communities like Del Carmen,” Mayor JR said. “And in the end they start influencing us [so] we can govern the right way. So from being Teach for the Philippines, they’ve been [actually] teaching us and hopefully, in return we were able to teach them as well.”

During the screening, Nanay Jen brought two of her friends, who were also inspired by her community-based teaching efforts. As soon as Nanay Jen’s part was shown, emotions ran high and she couldn’t stop her tears from falling. 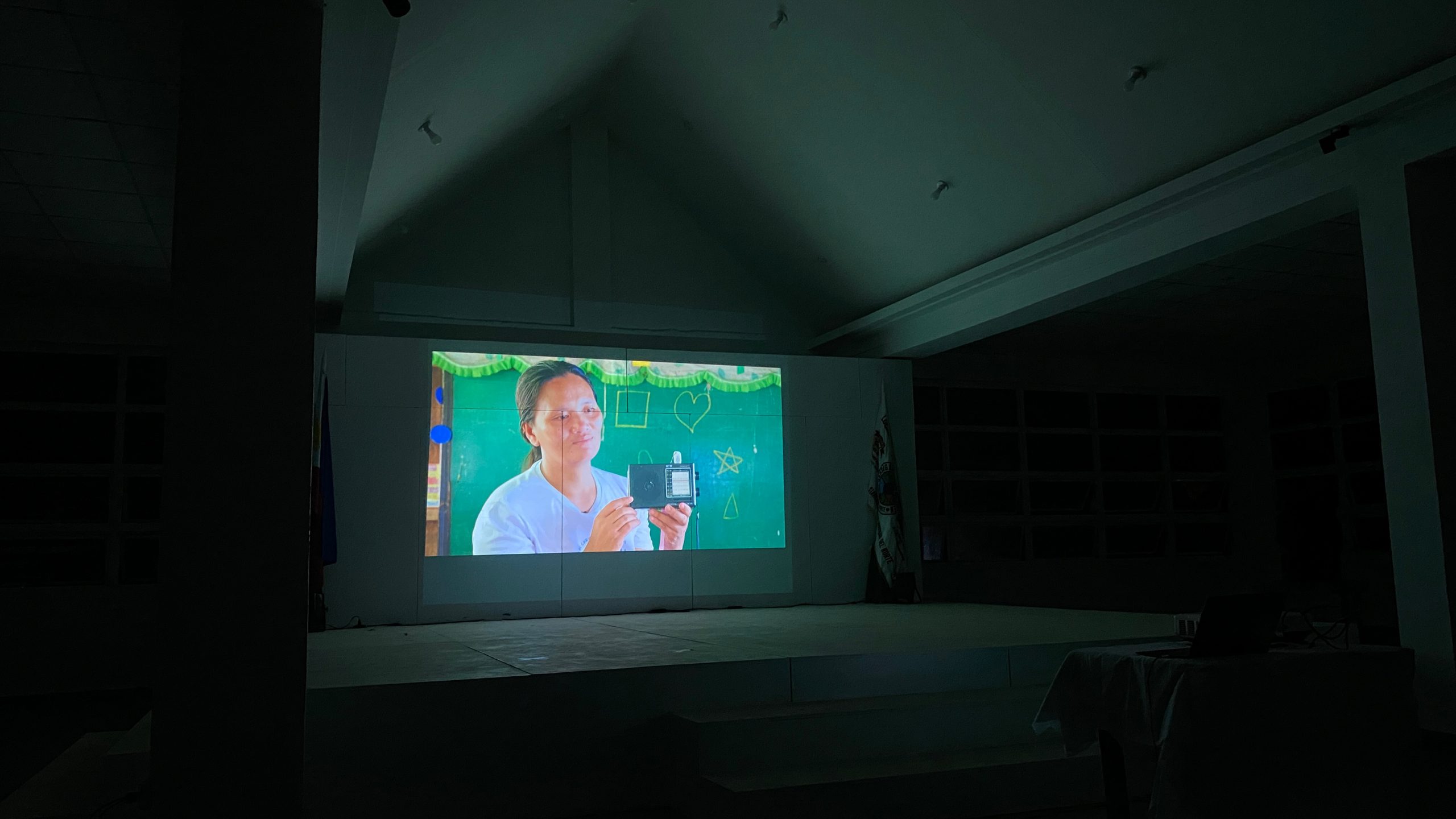 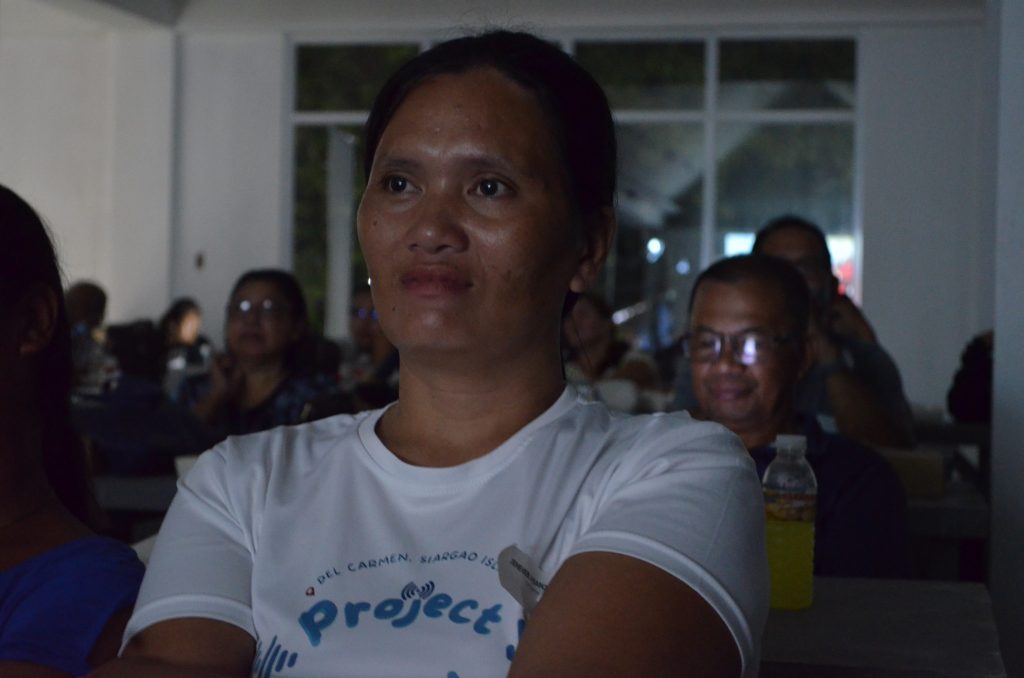 Nanay Jen showed a mix of emotions throughout the documentary. She was elated to see her contributions in the community be represented and recognized in the documentary.

The Del Carmen community watched intently as they saw different stories of Teacher Fellows, Teacher Leaders, Alumni Ambassadors, and parents all over the Philippines, who have been impacted by TFP’s big and small ripples.

At the end of the event, I asked Nanay Jen if we could take another photo before she left the venue. She asked me when I would be coming back and said that she’d prepare another meal for me, this time with other delicacies and her specialty dishes.

I said that I would definitely come back to this community. It was an experience that I will always carry with me, especially being an education advocate, and also a TFP alumnus. 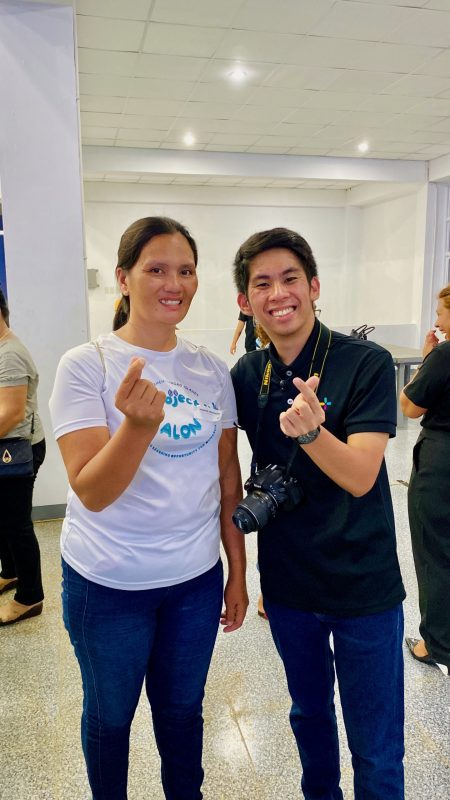 It was my first time traveling alone, but when I went back to Manila, I had a community marked in my mind and heart. I did not feel alone when I left Siargao. I knew I had a community to go back to, and more people who also believe that education is everyone’s responsibility. 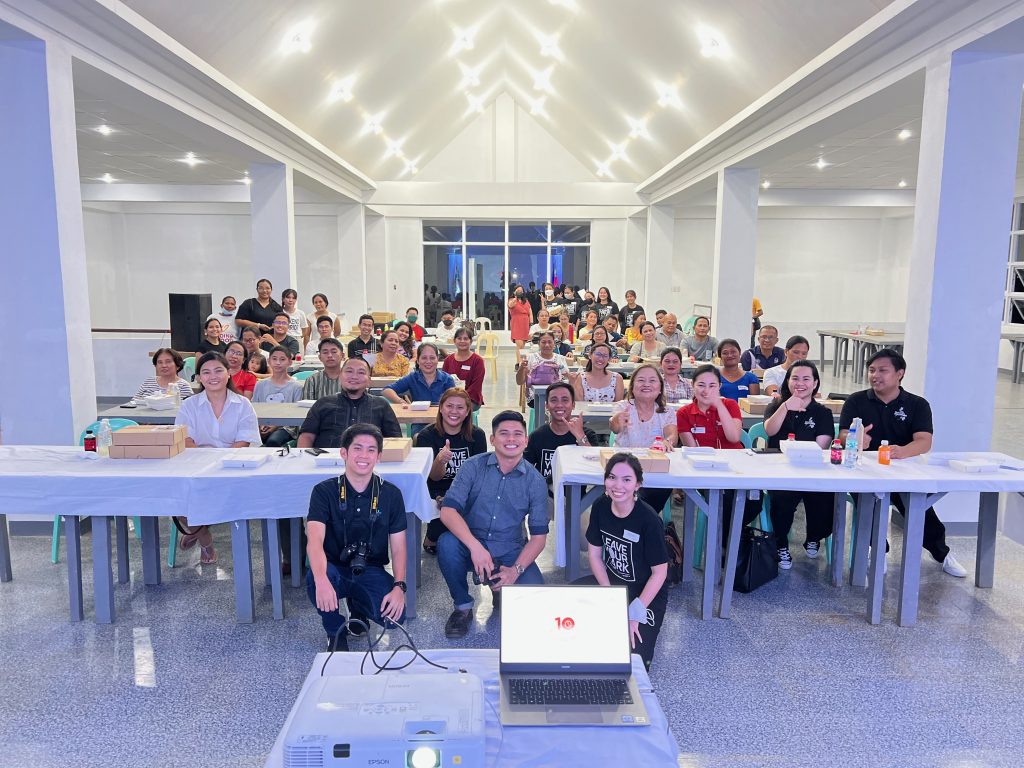 Evident has been helping TFP in its past regional roadshows and will continue to promote the documentary and the organization’s Ripples of Impact campaign in the coming months.

Watch Kilapsaw here. To learn more about Teach for the Philippines and its work, visit their website at teachforthephilippines.com.